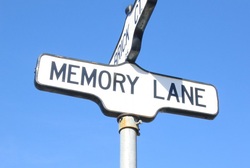 Do you have a memory of Brookfield's Town Hall that you would like to share? We'd love to hear it!

Drop us an email to FriendsofBrookfieldTownHall@gmail.com.
"I vividly remember climbing those stairs for the first time when I was probably 6 years old and dressed in my Halloween costume. I was probably a vampire, or something else entirely unoriginal. The Great Hall was full with parents and children marching around in costume and those with the best costumes were pulled up on the stage and recognized. I really wanted to get pulled up on the stage..." -William R. Simpson
"The one memory that always comes to mind for me is the Trivial Pursuit Tournament the Brookfield Community Club held when I was about 12 years old. My friends and I ran around in the balcony as our parents played Trivial Pursuit for hours below in the Great Hall. More than 20 years later, it's a memory that still makes me smile." -Lindsay (Jaffarian) Holm
"My favorite memory of the town hall is the short-lived theatrical company that put on shows there. Hilliarious to watch Brookfield residents pull out all the stops, I think a few of them were even in drag. And my cousin Sophie led the audience in a performance of the Macarena!" -Lisa (Heller) Boragine
"I attended kindergarten at the Town Hall. I loved walking in and hearing the creak of the floor and the woodsy smell of the building. Instead of being imposing, the Town Hall always felt like a big old hug wrapping around me when I walked in for class. In later years, I used to love going up there to visit Mrs. Lincoln.....and to hear the old floors creak. Somehow, it always transported me back in time. I remember being allowed to go to a function upstairs when I was little and thinking it was a grand ballroom. As a teen, I was always jealous when I looked at the grand pictures of the old dances and functions they held upstairs." -Lori (Wilson) Knutson
"I remember having pinewood derbys upstairs for cub scouts, and have some vague memory of people singing "Hole in the Bucket" which was probably part of the theatrical company Lisa mentioned. The building was so impressive (imposing?) as a kid, that it felt like a priviledge to be able to go to events there." -Jeremy Sutka
"I love and cherish all the moments I spent in the Town Hall. My preschool graduation, performing 'Head, Shoulders, Knees and Toes.' Dressing up for the Halloween Parade, hoping to get pulled up on stage for my costume choice. My dance recital to the Ghostbusters theme song (though most of that was spent in a chair on the side of the stage since my leg was in an air cast). Swing dance lessons. Watching friends perform in plays. It is such a gorgeous building that just makes you feel special as soon as you step inside." -Kara Simpson
"I have two special memories of the Town Hall from the not too distant past…. One is the wonderful dance that took place during the 325th Anniversary of Brookfield when just about all the attendees were dressed in period costumes for the occasion. It was well attended and was one of the highlights of the celebrations. Of course, that was before the upstairs hall was put off limits.

I also remember the line dancing lessons I participated in held in the same space for several community members. I’m not entirely sure, but think these weekly lessons might have been held just prior to the aforementioned dance." -Kathleen Wild